It’s been a while that I actually coded something in this particular Visual Studio project of mine (“Virus Total Download Checker”), but once I got into it again, I was hooked.

For a start, here’s a quick summary of my somewhere between half-finished and complete application:

So basically, this all works more or less (there are some glitches…), but what didn’t work were the maximize and minimize buttons on the form itself (which is shown when you double-click the tray icon):

The form when shown to the user

Despite the internet I couldn’t find out why the two buttons weren’t shown, and the usual suggestions like

didn’t apply to me, as they were set to the correct values: 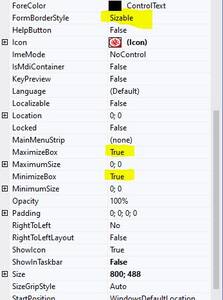 Excerpt of the main form properties

So after some more digging and going through the code, I finally found out why the buttons didn’t show up:

In my former attempts (see above, I hadn’t been working on the code for a while) I somehow seem to have had the idea of overriding CreateParams and setting the Params.ExStyle to 0x80 (WS_EX_TOOLWINDOW). This is documented as follows:

The window is intended to be used as a floating toolbar. A tool window has a title bar that is shorter than a normal title bar, and the window title is drawn using a smaller font. A tool window does not appear in the taskbar or in the dialog that appears when the user presses ALT+TAB. If a tool window has a system menu, its icon is not displayed on the title bar. However, you can display the system menu by right-clicking or by typing ALT+SPACE.

So I must have read what I wanted to read back then and the window also didn’t show up during ALT-TAB when running minimised in the tray. But if I’d read to the end I would also have seen that this hides the buttons I was missing.

So after removing this code and just setting the ShowInTaskbar property to false, the form behaves as expected. To support others that might run into the same issue, I also posted an answer on stackoverflow.com. Happy coding!

No related articles yet.

There are no comments