Quake 1 Mapping: Some more information regarding func_train and lighting

Following up on my last post, I wanted to provide you with a few more thoughts and details.

As you can see in the editor screenshots, I put the individual func_train entities (for the moving chain segments and the lift) into different positions to where they actually are in the game. The reason is the restriction mentioned before regarding the lighting: The func_train entities will move around the map from path_corner to path_corner while the game is running. The lighting, however, is static and calculated when building the map, based on where the lights are positioned around the func_train entity.

As both, the chain segments and the lifts, move through the large and quite high room shown in the screenshots below, there are different light effects within this room, but they won’t affect the func_train entities as they move through it. I could still have placed them within the room, but then e.g. the light just above the lava at the bottom of the room would still have shown as the chain segments and lifts move up, making it look more and more unrealistic (and vice versa when placing them further towards the top).

So as a compromise I decided to use flickering lights for the func_train entities and also within the larger room, making it less obvious that sometimes the lighting doesn’t really fit the position of the entities as they move. 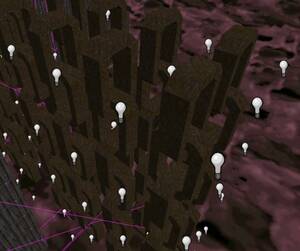 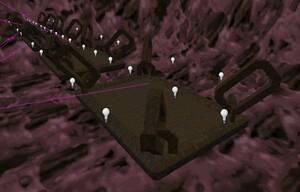 The result (and the issues mentioned above) can be seen on the following screenshots. The first one shows that the chain segment and the platform lighting don’t match, the second one (a fraction of a second later) looks okay while the third one shows matching lighting for the func_train entities, but here we have a mismatch with the lighting in the area around it. 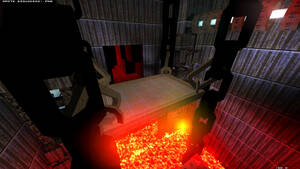 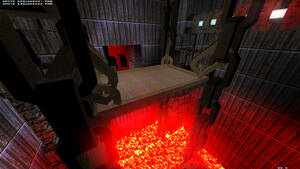 Here (due to the flickering light) it looks okay 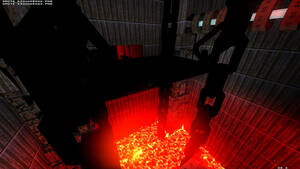 So “in motion” I think the current setup is a compromise that does look okay within the game. The good thing about is that I now have the ability to use the “paternoster” style lifts attached to the chains that continuously keep going without ever stopping. What do you think?